Sometimes, a verb decides to become a noun. Voila, that alters the game permanently

Consider the word ‘Startup’. Originally a run-of-the-mill verb that meant ‘the act of setting in operation or motion’, ‘Startup’ attained celebrity status the day it came to mean ‘a fledgeling business enterprise’. “The Oxford English Dictionary traces the origins of the term, used in its modern sense, back to a 1976 Forbes article,” says one research study. Does this mean no startups existed till then?

An exciting new article carried in the Nov 2017 edition of Harvard Business School’s Working Knowledge offers to teach leaders about the proper ways to conduct business. Nuggets include:

Sounds banal? Not when you discover they are from a book written in 1458 by an Italian trade merchant, Benedetto Cotrugli. The Book of the Art of Trade distils wisdom startups today would find invaluable.

Hailing from a family trading in cloth and wool, Cotrugli was a reluctant entrant into the world of business. He had to drop his studies at University of Bologna “to join a profession that he considered lacking in intellectual and moral discipline” To remedy matters Cotrugli authored a four-part handbook that covered in its magnificent sweep – origins and principles of trade, role of religion, civic duties, and some important domestic matters, including desirable qualities in a wife and ways to furnish a home to perfection

The underlying philosophy was that “You needed to be wealthy to give to others. Instead of conquering, you could achieve greatness through excellence in trade.” Having laid down those foundations for a grand overarching value system for a business, the book was replete with tips that can give a current day best-seller on startups, a run for money.

Shrewdness is good, said Cortugli, deceit isn’t. “He should neither hurt others nor allow himself to be got the better of, but manage to intuit where deceit and falsity lurk”, he counsels. Also, emphasized is the ability to sell for cash, selling on credit and receiving payment and keeping books in a mercantile manner. The need for new businesses to master sales, maintain books and documents and manage receivables efficiently hasn’t changed in over four centuries

Sales is important. As is diversification and avoiding concentration risk. “Be careful not to take on too many or too large transactions: do not try to net every bird that passes, because many have failed for taking on too much, but no one for exposing himself too little”, Cortugli advises. And he was astonishingly prescient on treating sticky receivables. After one year, cut the amount due in half and write them off entirely after two years, he suggested. For him, time lost by a merchant was far more expensive than loss of money 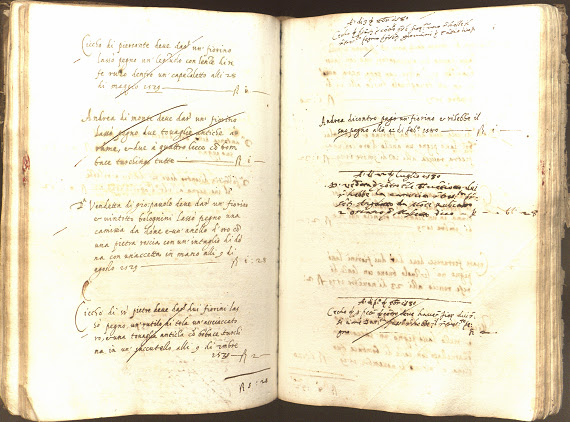 Part of the Baker Library collection: Account book of the Monte di Pietà (a charitable credit institution) in Rome, 1574-1643. Credit: Baker Library
Cortugli has a word of caution for family businesses pushing reluctant scions into leadership. He warns “… because if that son has a leaning elsewhere…he might not well prosper in that life, or would only get on with difficulty or remain stuck halfway with small profit to himself and without reaching his objective…” Mentoring was another strong need. Aspiring leaders should be “placed with a good and knowledgeable merchant so as to learn their trade because although many want to become masters without a master, this is not possible”

Retire early, Cortugli urges, proposing 50 as the outer limit. “He wanted money: he has got it; good name: he has it; possessions: he has them …what more does he want?”, he asks. That should warm the hearts of millennials leading today’s startups.

This blog is the extract of The Book of the Art of Trade, a book written in 1458 by trade merchant Benedetto Cotruglian Ragusan merchant, economist, scientist, diplomat and humanist, submitted by Prashanth.